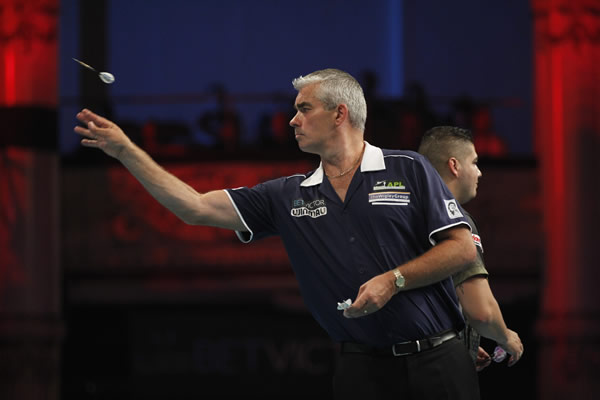 Steve Beaton won through to the second round for the first time since 2012 with a 10-6 defeat of Jelle Klaasen, as the number ten seed fell to defeat despite a spirited fightback.

Beaton produced some fine darts to open up an early 4-1 lead, hitting two 180s and a 13-dart finish in the process, only to see his Dutch rival respond to cut the gap to 5-4.

Klaasen, though, crucially missed two darts to level the game in leg ten before seeing Beaton edge into an 8-4 lead, and though Klaasen finished 81 and 82 to halve the deficit he was unable to prevent his opponent closing out victory with an 11-darter.

“I’ve been practising well and I’ve picked up my game recently, but I’ve probably never fulfilled myself on TV. Even at 52 I’m still as competitive as the rest and it’s a great buzz, the crowd are brilliant and that’s what you play for.”

1-3 – Both players initially miss one dart at a double before Beaton returns on double eight to regain his cushion.

4-5 – Klaasen completes a 14-dart leg on tops to reduce the gap further.

4-7 – Beaton breaks throw for a third time, taking out 50 on double 16 to move three legs up once again.

4-8 – Beaton wires the bull to finish 164, but three misses at double 14 from the Dutchman allow him back to land double eight.

6-9 – Beaton finishes 61 on double nine to move a leg away from victory.

6-10 – Beaton completes the win in style with an 11-darter, hitting a 177 before landing double 16 to move into the second round.