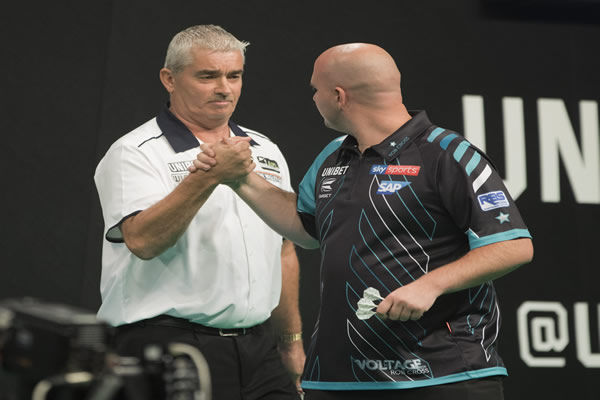 STEVE BEATON rolled back the years once again to knock out World Champion Rob Cross in round one of the Unibet World Grand Prix in Dublin.

Former semi-finalist Beaton dropped just one leg as he ran out a comfortable 2-0 winner, dumping out the world number three in the opening round of the double-start event for a second successive year.

Making his 15th appearance at the Citywest Convention Centre, the 54-year-old proved more clinical on both starting and finishing doubles to seal his passage to the last 16 of the £400,000 tournament.

“Knowing I’d beaten him at this stage last year was an advantage for me, I was determined to win again,” said Beaton, who will take on Gerwyn Price in round two.

“We had a bit of banter in the practice room that the last time I beat him here he went on to become World Champion.

“It sounds strange to say it but Rob is more experienced than me at the moment, in terms of his big stage play in 2018 so that makes the win all the more satisfying.”

2ND ROUND IN UNIBET WORLD GRAND PRIX
Scroll to top