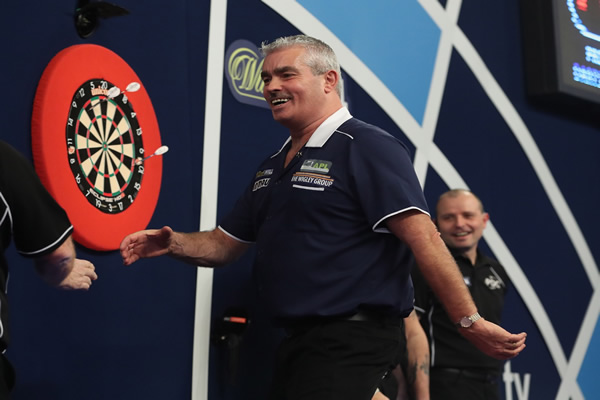 Steve is through to the second round of the William Hill World Darts Championship televised by Sky Sports between December 14th 2017-January 1st 2018. Steve will play again on Friday 22nd December against the winner of Dave Chisnall and Vincent van der Voort.
Steve defeated William O’Connor 3-1 Thursday evening.

Former Lakeside Champion Steve Beaton kicked-off this year’s event on his 27th straight World Championship appearance with a reasonably comfortable 3-1 victory over Irish debutant William O’Connor.
“I know William can play well,” said Beaton. “But I sneaked the first set and I thought after I got the second set, he didn’t get off the stage – he tried to get himself focused.
“I thought the last two sets we both played how we can play. He’s just got to learn, I mean I’m still learning! I still get the butterflies and I’m tense and everything.
“I couldn’t believe the ending there, we were both banging them in and I just came out on top.”