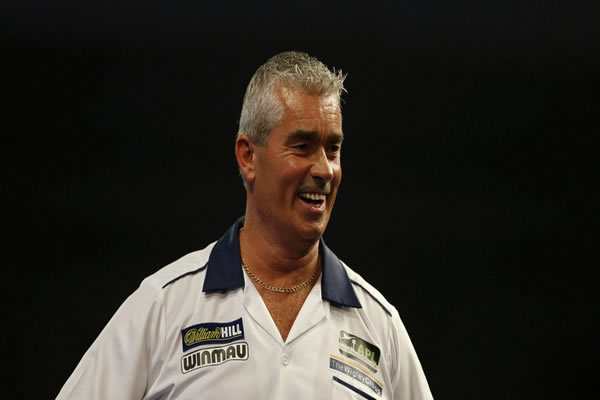 STEVE BEATON rolled back the years to claim a third PDC ProTour win as he defeated Gary Anderson 6-3 in the final of Players Championship 13 in Wigan.

It was Beaton’s first PDC tournament victory since September 2013 when he won on the European Tour in Sindelfingen, and his second career Players Championship title.

Anderson then missed the bullseye in the third leg to close the gap allowing Beaton to pin double 16 for a 3-0 advantage.

The Scot eventually got on the board in the fourth leg with a 12-darter but Beaton again extended his lead in the fifth despite Anderson hitting a fourth maximum.

The pair then held throw with Beaton moving 5-3 ahead and one leg away from the title, in his first final since July 2016.

Beaton then sealed a commanding 6-3 victory to claim the £10,000 first prize and told Dan Dawson of his delight after the win.

“I fancied this today. Ive been trying so hard this year and I’ve played really well today and I’m delighted to win.” Said Beaton.

“I went to bed last night thinking I want to be in the Matchplay so hopefully this will take me a long way to getting there. Everyone wants to win but maybe I tried that bit harder today.” Added the former Lakeside World Championship winner.

Beaton had opened the day with a dominant 6-0 victory over Matthew Dennant before Keegan Brown offered a tough test, with Beaton coming through 6-4.

Another 6-0 demolition job took place in the quarter-finals as Beaton whitewashed Kirk Shepherd to set up a semi-final encounter with Players Championship 12 winner Rob Cross.

Beaton looked strong again as he overcame his opponent 6-3 to book a deciding match with Gary Anderson.

The world number two needed a last leg decider to get through round one, beating Rowby-John Rodriguez 6-5.

Wins against Adam Hunt, Harry Robinson and Michael Smith followed to move Anderson in to the last eight.

The two-time World Champion then lost just one leg in the next to matches, whitewashing Kim Huybrechts and then beating Daryl Gurney 6-1 to progress in to the final.

Despite an average of over 108 in the final Anderson succumbed to a slightly lower average of 107.09 and finishing stats of 6/9, as Beaton sealed the win in Wigan.