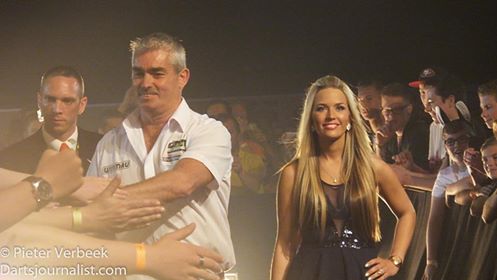 I played Gary Stone in the second round of the Dutch Darts Masters which was a very close game but I managed to break his throw in the last leg by taking out 106 to win 6-5.
I played Kyle Anderson next but after winning the first leg of the game it was also to be my last losing 6-1 after hitting 4 x 180’s and averaging 96.
The crowd were amazing in Venray 5000 plus Saturday and Sunday.
Congratulations to Michael Van Gerwen on winning the event on his home turf.
I have already qualified for the next European event in Riesa Germany so am hoping for a better run in that one.
Exhibitions this coming weekend in Melton Mowbray, Aberdeenshire and Glasgow. Just a few miles !!!!!!!