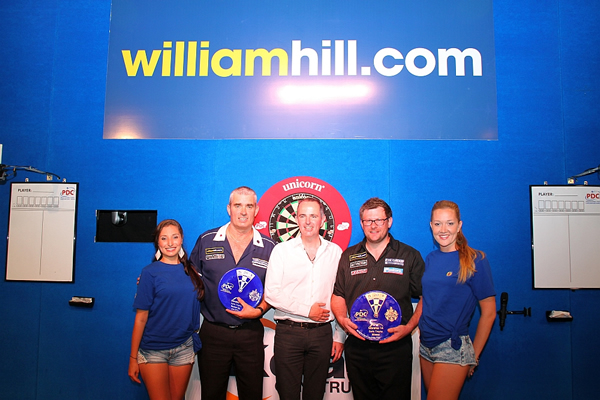 Steve made the final of the Gibraltar Darts Trophy losing 6-4 to James Wade.

Steve overcame Bristol’s Andy Parsons 6-3 Saturday afternoon to move through to the last 16 of the Gibraltar Darts Trophy to take on Johnny Haines.

He then punished Johnny Haines for missed match darts in their 11-leg tussle to set up a quarter final match against Gary Anderson.

Steve overcame some nervous moments as he edged past Gary Anderson 6-5 in an 11-leg thriller.

He then took out 76 to win the opening leg and after Gary levelled, finished a 13-darter, double one and double eight to establish a 4-1 cushion, which Steve also extended to 5-3 only for Gary to hit two double five finishes to force a decider – as Steve missed his chance to claim victory in successive legs.

The former World Champion held his nerve in the decider by scoring 139, 140 and 140 to be first to a finish, before posting double ten to finally seal his last four spot against Simon Whitlock.

Beaton then produced a fine fightback to secure his place in the Gibraltar Darts Trophy final with a 6-4 defeat of Simon Whitlock.

Whitlock hit a 180 as he took the opening leg, only for Beaton to finish 60, 96 and double nine to take a 3-1 lead, but the Australian edged the fifth, took out 121 on the bull in the sixth and traded 180s with his opponent before landing tops for a 4-3 cushion.

Beaton finished 116 to level and tops to move back ahead, before punishing a missed bullseye from Whitlock in the next to remain on course for his second European Tour win inside 12 months.

James Wade joined Beaton in the Gibraltar Darts Trophy final with a 6-2 win over Michael Smith.

1-0 – Beaton misses tops for a 160 finish but returns to land double ten to take the lead.

1-1 – Wade posts a maximum, and when Beaton misses two darts at tops to extend his cushion, the left-hander returns from his earlier two misses to level the game.

4-1 – Wade misses two darts at tops, and Beaton hits the same bed as he extends his lead to three legs.

4-4 – Beaton misses two darts at doubles to regain his advantage, and Wade capitalises by finishing 76 on tops to level the game.

4-5 – Wade opens with a 180 and Beaton hits a 177 in reply, with the left-hander missing two darts for the leg only for Beaton to miss double 11 for a 142 finish, allowing the world number six back in on double ten to move ahead for the first time.

4-6 – Wade is first to a finish, initially missing his chance to claim the win before pinning double ten to seal his first tournament win since 2011.

“I’ve won so many tournaments but it got to a point where I thought I wasn’t going to win another one, and this means more to me than any TV tournament I’ve ever won,”

“I wasn’t quite sure if I could do it. Even though people said I could win more titles, it’s different actually doing it so I’m really happy.

“I grew up watching Steve and other great players, and he said afterwards that he was pleased to see me winning again, which is a mark of the man.

“I really enjoyed this weekend and at 4-1 down in the final I just wanted to relax and make a game of it.

“I’m still a long way from my best but I never give up and I’ve shown a lot of desperation. I’ve got no fear of hitting the winning double but it’s getting to it that’s the hard bit!”

Beaton who moves up to nineteen in the PDC order of merit had been looking to follow up last September’s German Darts Masters victory with another European Tour success but had to settle for the runner-up Prize said:

“Fair play to James he’s had a tough year or two but that’s why he’s up at the top of the game and such a good player.”

“I had some chances and didn’t take them, and James was the better man in the final.”