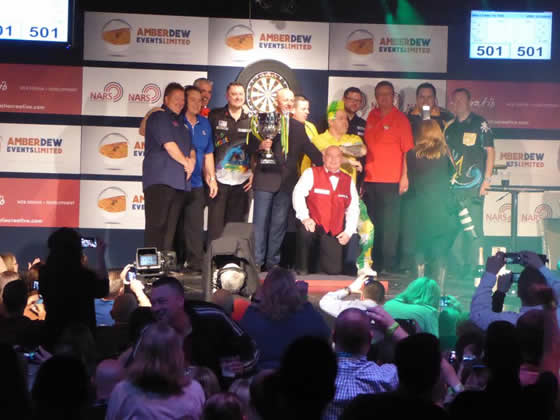 was played at EPIC TV Studio’s on Saturday 2nd April with an amazing audience of around 900 ensuring a true PDC style atmosphere.

The event was organised by Lord Russell Baker of Little Moulton and sponsored by Lord Baker’s Company Amber Dew Events. The evening started with four audience members being drawn to form two doubles teams to play two doubles matches with Eric Bristow MBE and Keith Deller. What a reception both Eric Bristow and Keith Deller received as they entered the arena in full fanfare of lights, walk-on music along with the walk-on girls Emma Craske and Andree Byron. Keith Deller in particular receiving his much awaited partisan reception from the Norwich City faithful raised the roof, and in time honoured fashion Keith Deller responded and entertained the crowd joyfully, so the evening was set for the BIG stage.

The Norwich Match Play Darts Championship was to be battled out by eight top PDC players taking part in the Quarter-Finals, and what a Quarter-Final draw we had in prospect too; drawn live on BBC Radio Norfolk on Saturday 26th March we had the following mouth-watering ties to look forward too:

So the stage was set for a very special night in Norwich, and who was going to win a very glittering championship trophy at the end of the evening playing the best of 9 legs through-out the championships? The quarter-finals went the way of the form book with Dave Chisnall beating the 1996 World Champion and North Walsham based Steve Beaton in a very close encounter, the former two times back-to-back PDC World Champion Adrian Lewis came out on top against Kevin painter again in a very interesting match, James Wade overcame the former World No.1 Colin Lloyd and local darts hero Peter Wright who was sportingly wearing the yellow and green of Norwich City Football Club, with yellow and green Mohican hair style, pulled out the big shots to finally eliminate a very entertaining Wayne Mardle.

So the semi-finals were upon us and the crowd were creating an atmosphere that was both vibrant and hypnotic, surely the evening was never going to end. The semi-final walk-ons were incredible with each player in turn taking longer than expected to enter the stage as the audience were getting autographs, selfies but eventually climbing to the stage to rapturous applause bordering at times hysteria through the excitement of the evening. So we were set, it was game-on for the semi-finals. Four of the PDC Premiership heavyweights lined up to do battle with Dave Chisnall pulling through his semi-final against Adrian Lewis in a tightly fought encounter 5-3 and Peter Wright defeating James Wade 5-2.

So the Norwich Match Play Darts Championship Final was set with local hero Peter Wright to play Dave Chisnall, with Peter Wright throwing some amazing darts and the 180’s just kept peppering the treble 20 to finally win the match and the Championship by 5 -1.

What a night…what a championship…and it will all happen again in 2017.

Lord Baker said, “This is the first big event of this type I have organised, but what a night it has turned out to be. I have a few things to iron out for the next event here at EPIC TV Studio’s, and this will always be the case for an inaugural event in a new venue, but overall I’m very pleased with the outcome and seeing so many darts fans having a great evening made it a sensational if not inspirational evening.”
Lord Baker added, “My thanks to all the players and official’s, staff at EPIC TV Studio’s and more importantly the audience who made this event a true sporting night to remember. Huge congratulations to too Peter Wright for winning the championship this evening, Peter is an amazing player and was hugely popular with the audience tonight”.