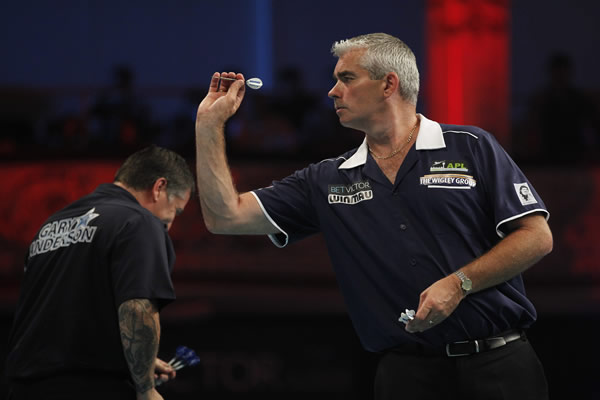 World Champion Anderson, meanwhile, held off a fine fightback from resurgent Beaton to eventually claim a 16-13 victory as he reached his second semi-final at the Winter Gardens – setting up a rematch of his classic 2014 clash with Taylor.

Beaton, the 1996 Lakeside Champion, had rolled back the years in his wins over Jelle Klaasen and Michael Smith to reach his first TV quarter-final since 2010, but saw Anderson take out 122 and 104 in an early surge to move 6-2 up.

The Scot extended that advantage to 8-3 before Beaton, inspired by a 135 bullseye finish, produced a fine run to pull back to 10-8.

Anderson punished his missed doubles to move 11-8 up, but Beaton finished 85 on the bull and 88 before levelling at 12-all by landing double ten.

Anderson, though, found a timely 177 before double six edged him back ahead, and a 70 finish on tops broke throw to move him 14-12 up before he defied an 11th maximum from Beaton to move three legs clear.

Beaton responded on double eight, but Anderson produced another 177 score before double top finally sealed his place in the last four.

I knew it was going to be a hard game and it was, and fair play to him,” said Anderson. “I got into a good lead, Steve started coming back and I started missing a few doubles – but then he missed a few and gave me my chance to win the game.

“Steve’s a great guy and he likes a good laugh, but he’s still a cracking dart player. If it had gone 15-all I think Steve would have gone on to win, he did great and I was fortunate to win.”

Anderson added: “My record here is rubbish and Phil’s going for his 16th title, so I think the pressure’s on him but I’m looking forward to it. Phil’s playing well and it’s always special for me to play the greatest player ever.”

Beaton admitted: “It was absolutely brilliant and I don’t mind losing to the World Champion. I knew I had a tough game and I was a bit slow out of the blocks, and towards the end it got exciting for the crowd.

“I slipped up once or twice and he capitalised on it, and that’s why he’s the World Champion.”

1-0 – Anderson makes an ideal start to finish 122 on the bull to win the opener.

2-0 – The Scot doubles his lead with a break of throw.

3-2 – Beaton breaks throw to reduce the gap, with both players landing 180s before a missed bull from the Scot allows him back in on tops.

6-2 – Anderson fires in a 180 before hitting double ten to move four legs clear.

6-3 – Anderson misses his chance to open up a five-leg lead, and Beaton finishes a third-dart double eight to respond.

9-4 – Anderson takes out 60 to capitalise on a missed chance from Beaton.

9-6 – Double five for Beaton sees him cut the gap to three legs.

10-8 – Anderson fires in a 180 but misses five doubles, allowing Beaton back in on double four.

11-8 – Beaton lands two 180s, but is unable to cut the gap to one leg, with three missed doubles across two visits enabling Anderson to return on tops.

11-9 – Beaton hits his sixth 180 before double ten cuts the gap to two legs once again.

11-10 – Beaton hits another maximum before taking out 85 to reduce the arrears to one leg.

12-10 – Beaton misses his chance to level with missed darts at double four and two, with Anderson following an earlier 180 with double top.

12-12 – Beaton fires in a ninth maximum, and when Anderson misses one dart at double 19 the former Lakeside Champion takes out 56 on double ten to level the game.

15-12 – Beaton fires in a 180 to leave ten, with Anderson missing double 12 and six only to see his opponent falter on double five and two, allowing the Scot back in on double six to move a leg away from the win.

15-13 – Anderson misses one match dart, at the bull, and Beaton pins double eight to keep his superb challenge alive.

16-13 – Anderson hits another 177 before tops secures an epic triumph.