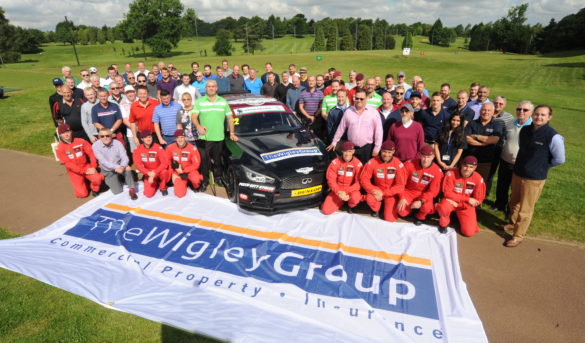 A charity golf day organised by a Coventry company featuring a host of sporting stars and a parachute display from the Red Devils raised more than £20,000 – a record in the event’s history.

More than 150 guests from the region’s business community attended

The event at Staverton Park De Vere – now in its fourth year – was attended by stars from the world of sport including promotor Barry Hearn, darts professionals Colin Lloyd, Mervyn King and Tony O’Shea and boxing champions Micky Cantwell and Spencer Oliver.

The British Army’s Parachute Regiment display team the Red Devils got the day underway in spectacular style landing on the course with the tournament golf balls.

John McDonald, former Paratrooper and TV sports announcer, hosted the event and guests also heard from injured members of the Parachute Regiment who shared their stories about how the Support Our Paras charity had helped them.

The theme of the event was a tribute to Coventry-born darts legend Steve Beaton, who is sponsored by The Wigley Group, to mark the 20 years since his world championship victory.

Prizes were also awarded to the winning golf team and for nearest the pin and longest drive.

Robert Wigley, managing director of The Wigley Group, a commercial property, risk and facilities management company based in Coventry, said: “This event has gone from strength-to-strength since we started four years ago and it was great to see so many famous faces showing their support for a fantastic charity.

“Seeing the Red Devils parachute onto the course and then hearing their stories brought home to us all how brave the members of the Parachute Regiment are and why we are so committed to the Support Our Paras charity.

“This year we launched a new initiative which will see the funds we raise used specifically to retrain injured soldiers for careers in the property industry.

“Tailored training focussed around three areas – construction, health and safety and facilities management – and will be offered to ex-soldiers identified by the Support Our Paras team.
“We are enormously grateful for the support and generosity of all those that attended and are delighted to be able to contribute a record figure to Support Our Paras which helps so many injured soldiers and their families overcome difficult challenges.”

The Wigley Group has now raised a total of £63,000 for the Support Our Paras charity over the past four years.

Legendary sport promoter Barry Hearn said: “The Wigley Group has always been very supportive of Support Our Paras and I think we should all get behind these boys – it’s a pleasure to be part of such a great day.

“These kids are representing us all around the world and the least we can do is show our support for them back home.

“The Red Devils display at the start of the day was a class act and it was the first time I’ve ever been that close to parachutes landing. They were so professional and came in at great speed – it didn’t make me want to go and do it but I was super impressed!”

An evening picture from the The Wigley Group’s annual Golf Open and Gala Dinner...
Scroll to top