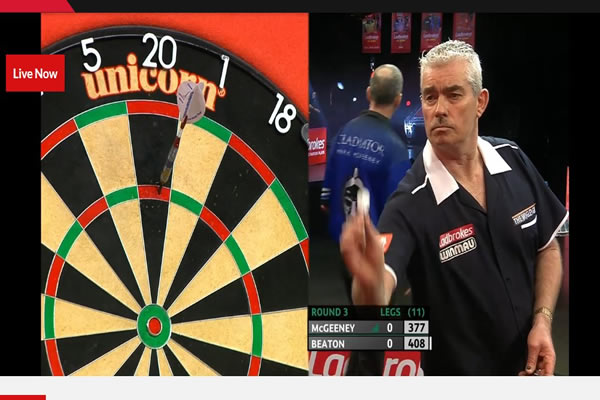 Doubles seemed to be smaller than trebles for Steve today …what a strange game!

Steve looked really poised at beginning, got his scoring going very well in the second leg and went clear by over 300 points in that one, absolutely nothing pointed to a scrapy battle for Steve at that point …but somehow he couldn’t find the outer ring before Mark found a way to escape.

After losing the next leg too The Adonis was 0:3 down. Mark wasn’t hitting much except from his doubles to be honest, so a comeback definitely wasn’t out of reach! Steve must have been thinking exactly the same and took the next three legs in 14, 18 and 19 darts to level the game! The following legs were caracterized by low scoring from Mark and missed chances by Steve. Nevertheless Steve managed to break the throw for his first lead at 5:4! He seemed to be the much better player of the two all match long and it really felt like there was only one winner from here …but it wasn’t to be. Steve came close at the bull for a 122 comination in the penultimate leg to seal the deal and unfortunately missed his second match dart on D16 on an 101 combination in the decider.

Hard times on the outer ring for Steve today, 18 missed darts proved to be too much as Mark hitted 6 out of his 10 attempts.
Fun fact: At least Steve’s darts are into Round 4 …Alan Soutar who is impressing in his first year on tour so far is trusting in Steve’s old silver darts

Not the result we all hoped for, but the good thing is: After a tough second half of last season Steve’s throw looks so promising again this year …as smooth as it ever was!